How to Live with a Ghost 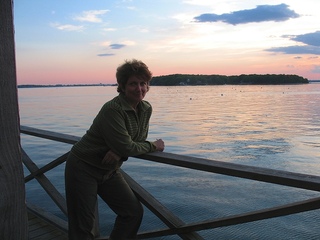 A few years ago, I rented a house on Peaks Island, Maine while writing one of my books. The house had been unoccupied for a year. The ferry arrived just as it was getting dark. I called the island taxi and a ruffled man drove me to the house and waited until I unlocked the house. It was a bit spooky even without notice of ghosts; the old house had scant furniture in it, no WIFI, and no phone. But the good news was that I would be unconnected so that I’d have no distractions to my writing. I sent up a writing table and went to work.

On the second day two women stood outside the house, pointing. I went out to see if something was wrong. It turns out they lived in the house when they were children. I invited them in so they could have a nostalgic tour. As we entered the house, one woman, Cathy, said, “Have you seen anything odd since you’ve been here?”

“Odd how?” I said. But I already knew the direction we were going. Odd.

“It’s nothing really but Mr. Frelick is a ghost and he likes to play pranks. Only friendly pranks.”

“What kind of pranks?” I said. We had moved into the dining room and the door to the basement loomed nearby. I couldn’t believe we were having this conversation.

“He liked to lock people in rooms. Doors would slam shut and you’d be locked in for hours until someone else came home to rescue you.”

Could they not see that I was here alone and that they should have kept this whole business to themselves?

“Did he have any favorite doors?” I asked.

Wait for it, of course he did. “Yes, the basement door.”

Under no circumstances would I enter the basement. The boiler could explode, spring floods could rage through and I was not entering the basement.

The bearers of ghostly tidings were not done yet. “And if you should see a small woman, that’s my mother. Or it was my mother. She’s no trouble at all. She loved this house.” And off they went on their merry way.

Another writing buddy was due to arrive in five days to spend the remainder of two weeks with me. But until then, I had to contend with Mr. Frelick and the tiny woman by myself. I needed rules of cohabitation.

Rule #1. Do not go into the basement.

Rule #2. Only worry about the basement door, not every door in the house. (I couldn’t remember this rule at 3 am when I had to get up to pee; it was hard not to picture Mr. Frelick behind every door.) Don’t generalize from the specific.

Rule #3. Sleep with the lights on. At the very least, the bathroom light. I didn’t try this obvious suggestion until day 5 when I was desperate with sleeplessness. Of course, ghosts don’t like bathroom lights. Or was that vampires?

Rule #4. Sleep far away from the tiny woman’s old bedroom. There were two wings of bedrooms in this rambling old house, and as soon as I learned about the mother’s attachment to her old haunts (ha) I moved to the bedroom farthest away.

Rule #5. Be willing to sacrifice your dear friend to the ghosts.

On day seven, Julie arrived, happy to be on our writing retreat. She moved into the bedroom formerly owned by the tiny old woman. I waited until the next morning to break the news about the ghosts. I told her the whole story over our breakfast of hot oatmeal. She held her spoon midway to her mouth while she listened, her eyebrows knitting ever closer together. She put down her spoon and said, “If I don’t come down in the morning, you’ll come find me, won’t you?” Which leads me to the final rule.

Rule #6. If the other writer doesn’t appear at breakfast, check her room for ectoplasm.

We never did see or sense the ghosts. On our last day, we walked to the island’s old cemetery to see if Mr. Frelick had really existed. We wandered amid gravestones until we found him. He was buried with his family. One daughter had died when she was a toddler, then his wife, and finally his only other child passed away all long before the demise of Mr. Frelick. He lived alone for a long time. I was sad for him, to have all of his sweet family leave so far ahead of him. Maybe he felt like a ghost long before he died.

Whenever I go back to Peaks Island, I stop by the cemetery to pat his headstone and say hello.
4 Comments