Evidence that Typos Are a Unique Life Form 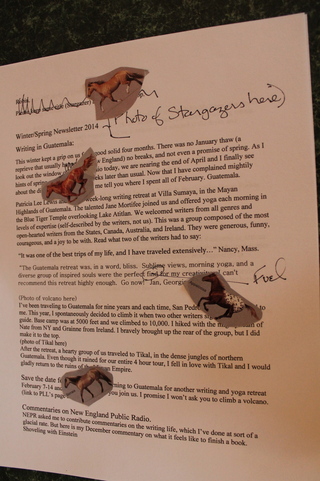 Typo Life Forms Revealed
Evidence exists that typos are in fact sentient beings. Or in this case, they look a lot like horses and they are plenty sentient. Please note the photo. For years I had suspected that I had examined every word of stories, essays, newsletters, and most recently Facebook postings, until there were absolutely no typos. None. Zero. And not that it’s perfect, but I also had Spell Check watching my back.

When would typos pop out, and clomp their happy hooves? Only when I had published something and sent it proudly into the world. Somewhere between writing a story, editing it, followed by the editor who has her way with it, and please stand back while the copy editor poured over each syllable until one would think that the story had been sandblasted, and finally published, is precisely when the devils called typos come out. When we least expect them, that’s when.

No one expects typos in a book that has been revised more times than one can imagine and then examined by the host of people mentioned above, and yet they appear to kindly readers who email me to say, on page 158, you misspelled (yes, two s’s says spell check) dog. Sure enough, when I go to page 158, dog is spelled dig. Now I don’t know about you, but when I misspell dog, it usually comes out god which made me think that we might be dealing with poltergeists. Even years after publication, I have learned that in the acknowledgement section of a book, the word (the very simple word) retreat was misspelled. How is this possible?

Then I caught them. Again I refer you to the photo. They are tiny hooved creatures, much like wild horses, but considerably smaller which is why no one has caught them before. Had I not set a motion-activated camera on a manuscript, they would have gone undetected. The bait was too tantalizing; they are apparently drawn to the scent of assuredness and black ink. They have a perverse sense of humor along the lines of the Broadway hit The Book of Mormon. They may have had a hand in writing it.