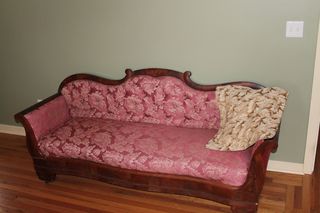 The Hilda Couch
I sold Great Aunt Hilda. I tried to sell her on Craig’s List, but it was not until I listed her in the local paper that the deal was closed. As soon as I met the buyer, I understood why Craig’s List hadn’t been the right place for her. Hilda had needed an old-school buyer, the kind who read the newspaper, hard copy, while drinking a cup of coffee. Someone who would understand her nature. She had needed Pam.

Great Aunt Hilda is a Victorian couch. She has been in our family for over 100 years, living first with my mother’s aunt, Hilda, then with my mother and then finally with me. I am the last of my tribe to live with the couch and it was like selling off a family member, but not just any old troublesome family member, but the one who was legendary for her sweet love of life.

There is a fine line between believing that inanimate objects can be infused with the vibrations of people who have long since passed, and simply holding on to old furniture for too long. I had been solidly stuck in between these two planes, serving as steward to the old couch and wanting to be rid of it. Pam saved me.
Even if I could have hand picked the new owner for the Aunt Hilda couch, I could not have come up with the sheer perfection of Pam.

The ad had only been in the paper for a few hours when a woman called.

“Is the couch still for sale?” she asked, a bit breathless, as if she had run to the phone after reading the ad.

She arrived within twenty minutes. When she spotted the couch, she shouted, “I love it!” Pam wore black lipstick, had thick white/blond hair in dreadlocks, and if the 60’s era had passed, no one had told Pam. She sat on the couch with her long, flowing skirt, already loving the Hilda couch in a way that she hadn’t been loved in years and said, “I want this couch so much.”

There they were, sweet Victorian meets free-wheeling artistic soul. This was a match made in heaven.

I have heard of the passing of the torch, but passing of the Victorian couch is a new one. A graceful passing to her new home, as they say with animal shelters, Great Aunt Hilda's couch found her "forever home."
Hmmm. I have a Martin guitar that needs a new home. Better get that Gazette ad in the paper.

I'm glad Aunt Hilda has gone to a good home.

What, couches don't converse. My old green uncomfortable one talks to me all the time!

It's really true that the precious memories weren't in the couch after all, they didn't leave with Pam. I have them still.

I loved that couch. At least it went to a good home.