The Cure for Political Gridlock 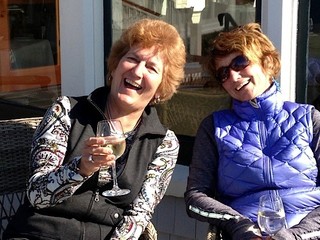 Anne and Jacqueline breaking the political divide.
I have a plan for the political gridlock and general bad behavior in Washington, DC. They’re going to hire my friend Anne and me to take them to Adventure Camp. By them, I mean our Senators; the Congress may require more help than we can offer.

Anne and I have been friends for decades. We met while working at a sprawling institution in Connecticut for people with developmental disabilities. We were recreation workers, driving wheelchair bound clients to the Bronx Zoo, swimming with clients with bodies that had long since frozen into untenable poses, taking groups of people with no discernable language to farm team baseball games. And for those who could manage it, they were sent off to Adventure Camp, run by Anne, where they spent a week in primitive cabins on the top of a hill.

Anne and I shared a love of dating bad boys, handsome, hard-drinking guys who made us shiver with delight. After 10 pm, when most of us went off duty, we’d dance and drink and smoke weed, culminating with skinny dipping at Roxbury Falls, all to shake off the tragedies of people who lived in the institution. I am talking about the dark ages of understanding disabilities.

How was I supposed to know that Anne was a Republican? It was the last thing on my mind. I thought all of us opposed the war in Vietnam and hated Nixon. We all cheered like crazy around the pool when Nixon resigned.

I grew up in a family thick with Democrats, stuffing envelopes at the dining room table for local elections in our little town.

Anne comes from a Republican family and I’m talking at least generations of Republicans.

Anne and I both ended up on the west coast, Anne to Southern California, me to Oregon. We both married and had babies. We both divorced, and eventually made our separate paths back to New England. Since 1996, we have gone on a vacation together each year. Anne continued working in the field of developmental disabilities and I became a psychologist and a writer. We tried to talk about politics a few times but it was awful and it caused havoc on our vacations. Finally Anne said, “We will never convince each other of changing.” So we stopped talking about politics entirely and we’ve been happy ever since.

Once we banished politics, we could just be friends again. We’ve been lost on little hobbit trails on Block Island, dehydrated on a trail on Cutty Island, and cursed at by a drunk Frenchman in Nice who blamed us for Vietnam. There was the full blown panic attack while snorkeling off a Mexican village (me) and the unfortunate episode with fire ants in Florida (Anne.) When my sister died, she was the first friend who called me.

So back to my point. When the Congress and the Senate hire us to fix their very poor behavior, here’s our plan: We’re taking them to Adventure Camp. No aides, no cell phones, no credit cards, no shirts, ties or high heels. Aside from not talking about politics, they will also be prohibited from talking about religion. Talking about religion requires advanced skills that they do not possess. They will be paired off, one Republican with one Democrat, to sleep in bunks and they’ll share a bathroom. Then we’ll turn off the hot water and they’ll have to figure out how to turn it back on. We’ll give them a map on day one, and the destination is Lake Lillinonah, about three miles away, where each team will find a two person kayak. They will have to kayak across the lake with their backpacks and join four other politicos for a camp-out out under the stars. They’ll cook together, figure out where to pee, and in the case of rain, they’ll have to figure out what to do with the one tarp left at the campsite. They can ask each other about family, friends, things they regret, embarrassments, how they fell in love. They cannot carry firearms.

The next day they’ll head back to Adventure Camp and they’ll all want to take showers and clean up but each pair will only have one towel. They’ll have to share. Some of them will be assigned to kitchen duty, some will have to catch fish, some will set up the dining hall, some will serve the food, and others will clean up. There will be a campfire and they can tell a stories but only if it has to do with being eight years old. There will be marshmallows and chocolate. They will each end by saying what positive thing they learned about their bunkmate and one thing they really liked about the day.

That’s my plan. If Anne and I can do it, so can they. If there is no improvement, we’re bringing in the fire ants.
8 Comments

Brilliant! Really!!! One of the best solutions I have heard yet!! ;). You have my vote on that!!!

What a great idea! I too worked in that field, as you know, and would find release and compensation doing many of the same things. I would love to be part in bringing our leaders back to earth. If anything, what a great reality show!

A reality TV show based on this premise? Brilliant idea.

Oh boy our secrets are out and your words, as always, captures the moments and memories. People need to remind themselves that politics don't always dictate who we are and who we love. Love ya Jackie.

It is the media spin that encourages the great divide....

Fabulous! Astute! A perfect cure-all for all the ills that need curing! Thx!

Perfect solution. They may have more fun than they deserve but it sure would make them better people.