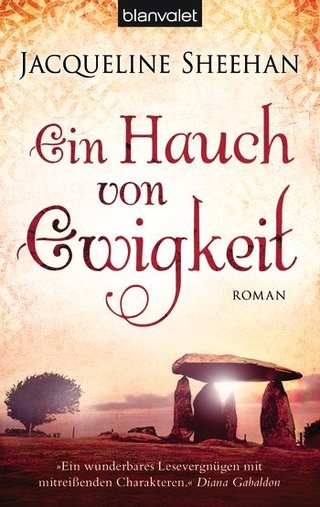 The German translation of Now & Then has just been published, which is not a surprise to me since I knew it was coming. But the cover? Now that was a surprise. I was expecting the cover that I had seen about nine months ago. It had been a lovely cover that captured the magic of the story, complete with Irish undertones, and a jeweled dagger. Now & Then is the story of an Irish-American family, haunted by a curse that had followed them through multiple generations, until they got a second chance.
While I wrote the book, I often glanced at a print of a Pentre Ifan, a stone formation called a dolmen in Wales. I had traveled there on four different occasions while working at a writing retreat. I had picnicked beneath the sixteen-ton capstone, napped, meditated, drawn images of it, and photographed the daylights out of it. It was built around 3500 BC and we don’t have much of a clue to its purpose although everyone has a theory. Burial tomb, meeting place of the Druids, or part of a larger settlement all come to mind. I bought a print of Pentre Ifan, taped it over my PC in my office and it inspired me while I wrote Now & Then.
I could not have been more surprised when the German translation arrived at my door last week. There was the perfect image of Pentre Ifan on my book, as if it had poured out of my head. I can’t explain it and I don’t want to.
1 Comments