Hachiko: A story of loyalty and devotion - Guest blog by Lesléa Newman 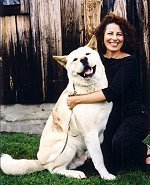 Lesléa with Nico, an Akita who looks very much like Hachiko.
Lesléa Newman is the author of 60 books including A Letter to Harvey Milk, Nobody's Mother, Hachiko Waits, Write from the Heart, The Boy Who Cried Fabulous, The Best Cat in the World, and Heather Has Two Mommies. She is a faculty mentor at Spalding University’s brief residency MFA in Writing program.

Sometimes, as my friend Patricia MacLachlan, author of Sarah, Plain and Tall, likes to say, if a writer is very lucky, a story comes along and taps her on the shoulder.
On day I felt a tap and turned around. I saw a paw. A very large paw. It belonged to Hachiko, the most famous dog in all of Japan.
Hachi, a beautiful golden Akita was born in 1923 in Akita Prefecture, which is in northern Japan. As a puppy, he traveled alone by train in a crate, to Shibuya Station. He was adopted by Professor Eisaburo Ueno, who named him “Hachi” which means eight, because he was the eighth dog that he had owned.
No one knows exactly how this happened, but one day when he was about six months old, Hachi walked the Professor to Shibuya train station. The Professor got on a train to go teach his classes at Tokyo Imperial University. Hachi saw The Professor off, ran home, and then returned at 3:00 to meet his master’s train. With great joy, the two friends walked home together.
This daily ritual continued for a year and a half until tragedy struck: The Professor died of a heart attack at work. Of course there was no way to explain this to Hachi, who was waiting at the train station like always. Eventually Hachi went home, but he returned the next day, the day after that, and every day for ten long years until he died of old age at the train station. Hachi became famous after an article about him was published in the Tokyo Asahi Shinbun, Japan’s most widely read newspaper. In this article, the suffix “ko” was added to his name as a term of affection and respect. Hachiko became a symbol of loyalty and devotion, and the people of Japan were so moved by his story, they erected a statue in his honor, which still stands at Shibuya Station today.
I don’t remember how I first heard of Hachiko, and I don’t know why he honored me by placing his paw on my shoulder. His story came back to me when I was taking care of Miss Truvy, a Bichon Frise who was owned by a friend of mine who asked me to do some dog-sitting for her. And so he began dropping Miss Truvy off at my house and before going off to work. Miss Truvy, who was old and ill, slept all day, and could easily have been mistaken for a fluffy white throw pillow. But without fail, each evening at about quarter to six, she awoke and ran to the door. And sure enough, about ten minutes later, my friend arrived to take her home.
And that’s when I remembered the story of Hachiko. Though many books had been written about him and published in Japan, no such story had ever been published in English. And so I wrote Hachiko Waits to honor the noble Akita. Having grown up with a Cairn terrier named Angus, who resembled Toto in the Wizard of Oz, I knew how strong a bond between a dog and a human could be. Wherever I go, people tell me how much Hachi’s story has touched them. Often, when I go to an elementary school, the children gleefully exclaim, “Your book made our librarian cry!”
The more I learned about Hachiko, the more I fell in love with him. So much so, that years after Hachiko Waits was published and met with great success, I wrote another book entitled I Remember Hachiko Speaks. In the novel, Hachiko Waits, I tell the story from the outside in: there is a third person narrator who recounts Hachi’s story. In I Remember: Hachiko Speaks, which is a chapbook of poetry, I let Hachi tell his own story in his own words. Because he is such a dignified animal, I chose to depict his voice in a series of formal poems (sonnet, haiku, etc.). Here, for example, is a triolet:

Hachiko never gave up hope, even though his situation appeared hopeless. And that is what I admire most about him. I’m sure he will continue to inspire me for years to come.

For more information about I Remember: Hachiko Speaks:
http://www.lesleanewman.com/newbks.htm
Be the first to comment