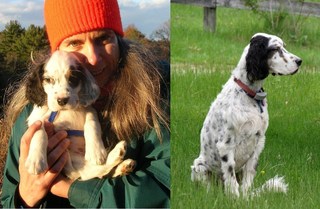 Suzanne and Bisquick, click on the image to go to Suzanne's webpage
Bisquick was the runt of the litter, only five pounds and eight weeks of age when my husband and I adopted him in the fall of 2007. A shockingly high heart rate detected on his first trip to the vet meant a referral to a doggie cardiologist who put the English setter on human heart medication identical to those being taken by my elderly human relatives and, once every few months, also put him on an X-Ray table.
Either the heart would regulate as he grew, or it would wear out quickly before his first year was marked. As we prayed for regulation, doled out digoxin, kept numerous medical appointments and became expert at daily monitoring his heart rate with a borrowed stethoscope, Bisquick indeed grew. Into his legs, his paws, his spots and - it’s cliché, but sometimes clichés are just what happens - into the full-grown hearts of all he met.
We all come into the world bearing expiration dates, but rarely pay them any mind until we realize that date might be on the horizon. As Tommy and I fell for Bisquick, and constantly fell to our knees to play with him on the kitchen linoleum, call him as he raced down a riverside trail, scoop him up as he drifted into sleep, we were ever aware we might not have him for long, and did our best to practice being in the moment: He’s here now, let’s enjoy him.
That first year taught me a lot about the construction of and challenges to the canine heart, but it taught me more about throwing the human one fully into whoever’s in front of you. Because you never know how long they might be there.
Except when literally he’s been in the woods, dashing along that trail, Bisquick long has been out of the woods. Now weighing 65 lbs. and bearing a heart into which he indeed successfully grew, he will be five this September. His humans continue their gratitude for this dog, and for the reminder he gave four years back - to be here now, and keep growing.

More Information about Suzanne:
Suzanne Strempek Shea is the author of five novels: Selling the Lite of Heaven, Hoopi Shoopi Donna, Lily of the Valley, Around Again, and Becoming Finola, and three memoirs, Songs From a Lead-lined Room, Shelf Life, and Sundays in America.
Suzanne is the winner of the 2000 New England Book Award. Her freelance journalism and fiction has appeared in magazines and newspapers including Yankee, The Bark, Golf World, The Boston Globe, The Philadelphia Inquirer, Organic Style and ESPN the Magazine. She is a regular contributor to Obit magazine.
Suzanne is a member of the faculty at the University of Southern Maine's Stonecoast MFA program in creative writing. She lives in Massachusetts with her husband, Tommy, and their two dogs, Tiny and Bisquick.

Bisquick is gorgeous and I'm so glad his story is a happy one. I too have a dog that has had a multitude of health issues and I know I take more time to drop to my knees and play with her, cherish her, because her time may not be long. A reminder of mortality makes us cherish all our loved ones, including our furry ones!

Maree - Thanks for the lovely comments, and your wisdom. Go enjoy your pup.