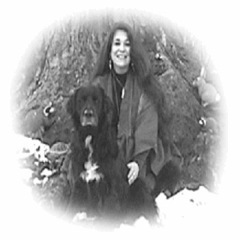 Cie and Thunder
A reddish gold corona rimmed the top of the mountains outside my bedroom window at 7:00 a.m. that January morning. I didn't awaken to it; I had been up every hour during the night. By 7:30, the light in the room was bright gold. "Look Thunder", I said as I kissed his head. "It's a perfect day for your new adventure." At exactly 8:00 a.m. his spirit escaped from the body I loved so well, into the freedom of no attachment at all.

He was my best friend. Thunder was my solace when all else failed; my companion, my joy, my protection. He deflected any negativity that was directed at me. He lightened me when I was too serious, gave me unconditional love, and accepted my love. Moreover, he was my healing partner. On the day before he died, he was still doing healing work. An eight-year old golden retriever came for healing. Thunder and she lay together like old chums while I worked on her, though they had not previously met. One time, concerned with his health, I told him to go on vacation. His inner voice responded, "I will if you will." If I was working, he was working. I was relieved to find Thunder still does healing work with me from the other side, on both humans and animals. Recently, he even sang with me on the inner planes, as I did sound healing for a client. During his life he loved to sing his heart out, modulating his voice to be on key. I have a tape recording of us singing Over the Rainbow and When You Wish Upon a Star together.

When he was thirteen, suddenly he couldn't manage the steep flight of stairs to our second floor home. I would somehow manage to get him outside in the morning, and then he'd stay out the whole day, until I found someone to help me carry him upstairs. My energy healings, and a few acupuncture treatments got him on his legs again. That's when he first got his nickname, The Comeback Kid. He pushed through Lyme disease, Hashimoto's (auto-immune thyroid), and complications from both. I asked him if he could stay until he was fifteen, and with typical generosity, he stayed for almost sixteen years. That was just like him – generous.

He had a special way with children who were afraid of dogs. He would sit very still while they worked up the courage to pat his back, and then run squealing with excitement at their own bravery. Thunder worked with elders too. It was beautiful to watch. He lowered their blood pressure, made them laugh and most importantly, opened their hearts.

Often healing clients would tell me Thunder came to them in the dreamtime with healing for them. Especially in the later times, people would call or email me with accounts of visions with him, often with messages for me. I received one such message two days before he died, saying that it was time for him to go, and that he would always be with me in my heart and thoughts. He also spoke of the gifts his death would bring. Thunder said it was time for me to have a new life. Time to give myself the same care and attention I gave him.

Even though the later years can be heartbreaking, frustrating and exhausting, they too possess gifts. They show us our shadow side which needs to be embraced and accepted as much as the qualities we admire about ourselves. Anger had popped up after I'd nursed, cajoled and cared for him all day, gone to the limit of my endurance, and still he needed more…or the night shift, just beginning when I was done in…even unreasonable anger that our last days together were so difficult.

At this point, some would ask why I didn't put him down. You see, we belonged to each other. It was hard to tell where one of us left off, and the other began. Until his last night, he had adjustments related to age, but no pain. As soon as he suffered, I asked the vet to come to the house. How I loved that dog! I've always felt sorry for those who have never let themselves really love an animal. They are missing so much – in communication, closeness, and the exquisite feeling of being in the presence of a pure soul. Even though it's hard to let yourself fully love one who has such a short life span, it's worth every moment.

Now that he is gone, the challenges are the little things. I forget and put aside some delicacy for him. I hear a noise in the night and wake to check on him. I look over hoping to see him riding next to me in the car. Perhaps most of all, I miss touching his soft fur and kissing his beautiful head. I miss my sweet boy. I try to remember that one's heart breaks open to get bigger – another gift. Thunder's final gift was that somehow I began writing about him the day after he died.

Thunder and I once went to an animal communication weekend. All the other dogs were fighting with each other and being territorial. Thunder was a Buddha in the midst of chaos. The facilitator wanted to spend time with him. He asked Thunder to show him who he was. Thunder showed him his heart. In the center, was a door, and when you opened the door, all you saw was sky. That's how I remember Thunder.


Cie's Bio -
Like her mother's mother's mother, who was the healing woman of her village in Sicily, Cie Simurro, Thunderbird Starwoman is a healer. She is the author of Totems for Stewards of the Earth, An Ecology of Love. She has been a writer and teacher of ancient universal wisdom for the past 37 years. She leads writing groups in Shelburne Falls, MA. Cie offers individual healing sessions, and trains people in Shamanic practice. To contact Cie, email: cie@ciesimurro.com. Read current and archived Totems articles at http://www.wisdom-magazine.com .
5 Comments

A gorgeous story of a truly eternal relationship. Cie & Thunder were a constant pair, beautiful, loving and gifted. I can personally attest to everything in this story, and will always be grateful to Thunder, as I am entirely, to Cie.

The universe recently deposited two dogs in my world. I hadn't had a dog, nor had I noticed them much for many years. This story, so lovingly told, reminds me of the beauty of a dog's companionship...one without condition. Thank you for sharing this with me!

Thank you, Cie, for sharing so deeply about your love for and life with Thunder. I remember him so well, the big, gentle, and beautiful boy he was. I'm so glad he is still with you in spirit. Will Rogers said (loosely quoted!), "If dogs don't go to heaven when they die, then when I die I want to go where Thunder is." Truly.

A beautifully written testimonial Cie, to unconditional love through Thunder ..so natural for an animal to give, yet a challenge for the human to give to self. Through the gifts of the animal species we learn so much about ourselves. Blessings to you.

I am deeply and profoundly aware of your grief and courage to go through the physical separation of your soul mate, as we become one soul with the animal that we love. Your right, there is no other experience so sacred as loving a child of mother nature, an animal, tree, river, rock, even the clouds. please know we are all with you, holding you in love and comfort.