A Snowy Day for Two Writers 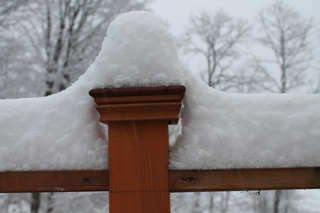 New Englanders love spring and the evidence of spring’s arrival was everywhere last week. Migrating birds had returned, tiny buds had popped out of the ground, and the air had a delicious sweetness to it. And then slam! A late snowstorm rolled in and dropped six inches of snow that had the consistency of pudding.

I hauled the snow shovel out of the garden shed and complained while I dug out my driveway. The bubble thoughts above my head said, “I hate this. Why don’t I have a snow blower? Why can’t our block share snow blowers? I’m moving to a condo.”

But the worst hitch in my plans was that the next day, my friend and writing buddy Elli Meeropol and I had planned a mini writing retreat at Patchwork, the mountain home of a friend who was out of the country. This was going to be our MacDowell (a hugely competitive arts fellowship where they provide room and board for up to eight weeks and the only directive is to pursue your creativity). Well, let’s say it was going to be six hours of MacDowell. More snow was predicted, the quarter mile driveway up to the house might be unplowed, and our plans seemed dashed.

At 7 am the next day, I called Daniel, the Renaissance man who looks after Patchwork. “I’m just heading out to plow the road,” he said cheerfully. A ray of hope emerged. But Elli and I still grumbled over the phone, “We could lose precious writing time. What if we get stuck? We should cancel.”

I’m not sure what made us give it a try. Maybe it was the photo of the snow covered view that Daniel sent from his cell phone or maybe it was just our natural stubbornness. But we loaded up our laptops and headed out. My Subaru never hesitated on the steep, snow packed driveway. Daniel had even turned on the heat for us in the house. Elli and I settled into our respective writing spots (each with a spectacular view) and wrote like demons until lunch time and then went right back at it until mid-afternoon. It turned out to be one of my most productive writing days in weeks.

We could have missed the entire day, the songbirds outside the window, the views of the rugged hills covered with snow, the solid hours of writing with the unspoken support of a friend. It just took a little faith, a bit of risk to turn a bad weather day into a beautiful day.