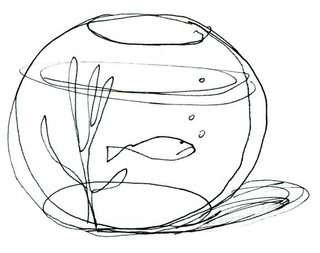 Sketch by Jamie Hogan
Since two of my books have been set on Peaks Island, and since the people of Peaks Island have been so kind and generous to me when I’ve gone there to write, I wanted to give back to the community. In June, I offered a free writing workshop at Peaks Library to anyone who wanted to attend. A roomful of people showed up ready to write, and as it turned out, to sketch as well. Artist Jamie Hogan is a book illustrator and she sent these sketches to me, documenting our night of writing. You can find more of her work at http://www.jamiehogan.com .

When I suggested that the writers experiment with embodying their character by moving around the island as their characters might walk, they exploded with laughter and said, “We live in a fish bowl on the island! If we walked to the grocery store like a character who limps, the gossip mill would light up.”

We spent the night laughing and writing. When I asked them to write about something horribly icky as if it was beautiful, they did so mostly to humor me, but the writing was some of the most reverential I’ve ever heard. Breathtaking, in fact. One writer detailed the intricate and essential world of a wiggling maggot with delicacy and respect, making the writing fresh and unexpected.

But my favorite moment had to be when we talked about the slow process of getting to know a fictional character. “It’s like a first date,” I said. “You’re both on your best behavior, but you don’t let the more interesting flaws show.” There was a respectful silence, and then one of the writers said in deadpan Maine style, “I can see that you’ve never dated a man from Maine.” I feared that we would hurt ourselves from laughing.

I had at first imagined that I was giving something back to the people of Peaks Island, but instead, they gave me an evening of fine writing and humor.
1 Comments

I would expect nothing less from you, Jacqueline, you are such a wonderfully generous person. Take advantage of these workshops, She is delightfully fun and wonderfully insightful.