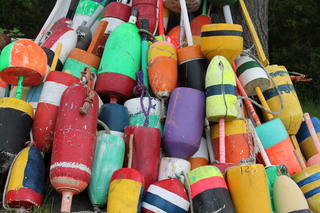 What is the best thing about summer in New England? Lobster rolls. There may be other virtues like the beach, the strawberries, the roadside stands selling local produce, but they all take second fiddle to lobster rolls. We can get pretty good lobster rolls right here in Massachusetts, but the ultimate place to get a lobster roll is Maine, and last week that’s where I was headed. I was touring with my new book, Picture This, and I had events scheduled in Portland and Peaks Island. Not only was I going to be in two of my favorite places, but I could already taste the lobster rolls as I drove four hours up the coast.
Portland Lobster Company sits right on the docks and it has rightfully been voted the best lobster place in town. I went straight to it and ordered my lobster roll, complete with fries and coleslaw. The pick up window was outside, a nice touch with the ocean breeze and weathered decking. The wait staff slid my tray of deliciousness out and I walked to the outdoor bar where I put my tray down for one freaking second, just to take in the moment. And slam! I was sea-gulled by a, please believe me, giant sea gull, a monster of his species. He expertly got between me and the lobster, grabbed it, knocked my drink into my fries and generally acted like Godzilla. The nice people at the Lobster Company gave me a replacement which I ate inside.
Word to the wise: sea gulls are smart and they know a tourist when they see one. Danger comes from above; guard the lobster rolls.
1 Comments

Oh - I love that place! They truly are the best lobster rolls! Head there every time I'm in Portland (during"the season"). Have always eaten outside on the deck - with, YES, the giant seagulls flying above. They are aggressive SOBs.... but you really got attacked. I'll now be more vigilant...