WHAT YOGA TEACHERS DO AFTER THE LAST NAMASTE 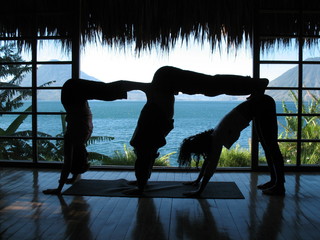 Yoga by lake Atitlan
Have you ever wondered what yoga teachers do after all the students leave class and the teachers are left in a great big studio? Well sometimes they become eight years old again and they play. One year at a writing and yoga retreat in Guatemala, I was Charles MacInerney’s yoga assistant. His inner eight year old is never far from the surface and at his prompting, we began to build yoga sculptures of the sort that we wouldn’t ordinarily offer in a class.
The morning breeze over Lake Atitlan was sweet, and we were all limbered up after our first class of the day. I can still hear Charles saying, “Have you ever tried this one? Oh good, let’s try it.”
I’m going to take his advice with my writing today. Play. Be eight years old. Try something that I’ve never done before just for the heck of it, because it might feel like the best thing I’ve ever done, like a yoga sculpture in a bamboo temple.
You can see what Charles is up to in Austin, Texas at www.yogateacher.com.
Be the first to comment