How Not to Write all Day 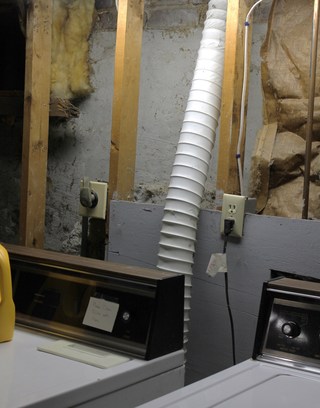 First, I read a small news article about dryer lint, in which a reporter tested a product that alleged to suck link out of inaccessible places in the dryer and how important this was because dryers catch on fire due to a build-up of lint. So I have a choice of writing, or going down to my basement and examining my dryer. My basement is more primitive than most; the walls are fieldstone, the floor is concrete, and pipes and wires compete with spider webs for space. But I do have a washer and a dryer.

I don’t have the special attachment that was mentioned in the newspaper, the one that attached to a vacuum cleaner, so I improvise. I have a tool that I use to brush dust off the coils in the back of the refrigerator and maybe I’ll do that too after I finish the job with the dryer.

I open the lint trap, pull out the lint screen and try to poke around with the long brush and it yields some lint, but not the suspected mother lode. Since I’m poking into an electrical appliance, I unplug it and when I get behind the dryer, I look at where the dryer spews out the hot air. The exhaust comes out a hole in the back and through a long hose that looks like a slinky covered by an aluminum skin which connects to another fat slinky that is covered by a plastic skin.

Since I’m committed to the project now, I examine the connection. I pull the dryer out from the wall; evidence begins to point to a lint problem, sure enough. There is a layer of lint covering the back of the dryer, the floor and wall behind the dryer. As I wiggle into the space and clean it, I become covered in lint, all over my black shirt and jeans.

My cats like to see me in action. They like it when I do something other than writing. It’s a banner day for them. I sweep, find a big plastic bag to dump the scooped up dirt and crapola, and then I decide to take off the hose from the dryer because clearly, something is amiss. The hose leads from the dryer, into a roughly sawn hole in the plywood wall, winds its way up the wall between the studs, to ground level where the hot air exits through a vent.

By now, it’s noon and I stop for lunch, bringing a bowl of soup down to the basement. I sit in front of the dryer and contemplate my next step. I am filthy; cobwebs stick to my hair, lint is stuck to my previously black shirt and I am certainly not writing. After my lunch break, I pull the slinky hose off the dryer where it had been attached by duct tape. This hose should attach to the plastic covered hose in the wall, but they aren’t attached at all…they are only friendly neighbors, adjacent to each other. I don’t know how long ago the hoses detached from each other, but the result is an ugly thing, almost like finding snakes in the basement.

I stick my hand into the hole and pull out stratified layers of tightly packed lint between the wall studs, the deep blue of my dark clothes, the more frequent whites, pinks, and beiges of my light clothes, all packed into the wall in its highly flammable state. I pull and pull, sticking my hand in, hoping only to find lint, not mouse communities. Then I remember my cats; they would have taken care of the mouse communities long ago.

After filling a very large bag with lint, I can’t reattach the hoses; it is not physically possible which leads me to think that the hoses were never attached. In order to attach the hoses, I would have to cut through the wall, making the hole bigger. This should be a time to call Daniel the carpenter. But then, if I did that, I’d be free to write. No point in bothering Daniel now. I’ve already wrestled with the dryer, detached the hoses, cleaned up a disastrous mess, and spent hours in the basement. I make a radical decision and yank the hose out of the wall near the ceiling so that it flops on the outside of the wall and now I can make it reach the other hose. If only I had duct tape, I could attach them.

Off to the hardware store. As I stand near the open front door, I look back and see the beckoning warmth of my newly built writing studio with its clean, beautifully lit space. It calls to me. Alas, I am too dirty to even enter the writing studio. I go to the hardware store, buy the duct tape, come home, reattach the hoses with multiple revolutions of grey tape and push the dryer back, although now it will only go part way back because of the flopping hose behind it. Good enough. I sweep, empty the bags of lint into the garbage can outside, go upstairs, strip off the dirty clothes and put on clean clothes. Amazingly, it is five o’clock. Day is done.

Now I am a tiny bit afraid to use the dryer, because if someone like me fixed it, should I really trust the quality of the work? I had the same feeling when my first husband and I rebuilt the engine on my VW. We disassembled the engine, found the blown out cylinder, repaired it, reassembled the engine, and bolted it back into the car. I was terrified; I never trusted the physics of the car after we had deconstructed it. And sure enough, about a year later, I was driving home from a concert around midnight outside Eugene, Oregon and smoke started billowing out of the engine and it just stopped. I walked back to a friend’s house. When I returned to the highway to get my VW the next day, it was gone, forever. Poof. I think it dematerialized.

I hope my dryer doesn’t dematerialize. I could just write.

Oy! So true. And any hangnail will do, won't it, when you're waiting for that door to open to the other side.