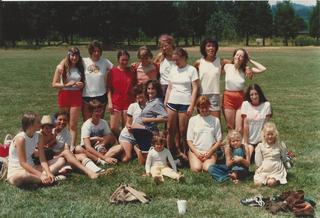 This is the Dusty Rose soccer team, 1982, with a pregnant coach and a breastfeeding player.
I wanted soccer before soccer wanted me. It is hard to imagine when girls were barred from a sport that is now so integral to every town’s recreation department. I sound like the last dinosaur roaming the earth when I tell this tale, but it is true.

When I was in sixth grade I saw boys playing soccer and I tried to play too. “You can’t,” a boy told me. “Girls can’t play soccer.” I didn’t see any reason why I shouldn’t play; I ran faster than most of those boys.

In high school, 1968, I found field hockey, a sport where girls ran around with a large stick and chased a hard, lethal ball. Mid-season, I suffered a concussion after being smacked in the side of the head with a stick. And yet soccer was still a no-go for girls. Too dangerous.

Girls were also denied track and field events. We could watch the boys’ teams and cheer them on. But watching someone else play a sport that has excluded you is like riding on the back of a motorcycle when you want to drive.

After college I moved to Oregon and turned my thwarted soccer desires into running, pounding the roadways along with 25 million other Americans who jumped on the running boom. I still pined for soccer but assumed that the game was forever beyond my reach.

Then Eugene, Oregon announced the first women’s soccer league. My friend Jan and I, both 30, shared the same secret desire to play. We signed up instantly. We had arrived! Soccer was ours!

We were unfortunately placed on the team filled with newly graduated University of Oregon soccer players. We were the worst players on the team (how could we not be? We didn’t even know the rules) and were shunned. In a reflection softened by several decades, I understand that these women had a fragile hold on soccer, had only played in college, and didn’t want two novices to sully their team. Let’s call it internalized sports sexism. Let’s call it a painful way to learn the game.

I warmed the bench for all the games. With nothing else to do, I learned the rules by watching my teammates.

The next season, Jan and I formed our own soccer team. We were a team of teachers, writers, back-to-the-landers, and mothers. Because I had been running every day for the last six years, I was the perfect choice for a midfielder, sprinting over the majority of the field. We learned a few plays and found a sponsor. At the end of the season more women wanted to join us.

The next season, a new coach showed us films about Pele and told us to become more aggressive, which we all vowed to do. By mid-season, I finally had what I longed for, the joy of sprinting up and down the field, tapping a soccer ball, passing to women who were sometimes in the right place, being part of a team, piling into my ancient VW van for away games. For most of us, this was the first time we had been part of a team.

Graduate school beckoned and my team days ended. In the following years, I trained as a referee and coached my daughter’s soccer teams, which was something, just not the real thing.

By the time that I turned 50, I had moved to Western Massachusetts. Soccer is a young person’s game, but I wanted one more shot at it. I called the Rec League and asked if I could practice once with an obliging team. They found a team who welcomed me. These young women had never been denied anything in sports. A soccer ball was an extension of their body. They were kind and gracious, they passed the ball to me whenever I was open. We all wanted me to make a goal. I didn’t, but the day was a sweet do-over from the first soccer team I played on.

This summer marks the 7th Women’s World Cup Soccer Tournament. I’ll be in the stands in Montreal to see young women who have played soccer all their lives, passing and heading, taking well-crafted corner kicks, and goalies diving through the air to make heart-stopping saves. I’ll be the dinosaur in the stands who remembers when girls couldn’t play.

beautiful (but sad) tale, Jacqueline. But, my friend, you'll never be a dinosaur.