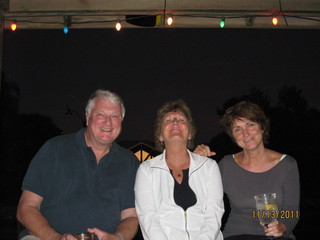 Clark, Anne and Jacqueline
I met Clark when I was 18, fresh out of high school. We both worked on a federal program called Student Work Experience and Training (SWEAT) at Southbury Training School, an institution in Connecticut for people with developmental disabilities. I met Anne when I was 23, once again working a summer job at the same place. The three of us became friends, along with throngs of other college students who worked at the huge institution. We provided personal care to the residents, took them camping, swimming, bowling, sat through endless sessions of bingo, and escorted multiple busloads of people with multiple disabilities to the Bronx Zoo. In our off time, we partied with abandon, often as a way to vent our frustration with an antiquated system of dealing with the residents that we believed was repressive and restrictive. We drank a vast amount of beer, as if that would help.

Anne and I maintained a friendship throughout the years, making treks to our various homes in Oregon, Chicago, California and finally back to our respective homes in New England. We’ve known each other through divorces, multiple jobs and children growing up. We usually go on an adventure of some sort once a year. But I had lost contact with Clark.

Within minutes of stepping into their home, we started talking and didn’t stop for four days. We talked about old things as well as things that we had never told each other. We knitted parts of our lives back into focus. I am still struck by the joy at finding the core of each of us, as if we hadn’t changed and yet we had changed, wonderfully so. In fact, our true natures were easier to get at these days, not clouded by the angst of being twenty-something friends.

As if choreographed just for us, dolphins put on a spectacular show as Clark and Susan took us boating along the inland waterway near the Kennedy Space Center. I imagined that Clark saw this show of leaping and twirling everyday, and then I looked back and he had the same expression of amazement on his face that Anne and I did. There we were again, clearly not in our twenties, but together and in awe of this fine life.
1 Comments

Thanks for reminding us of that wonderful weekend. So many laughs and talks. We're ready for a return visit any time!